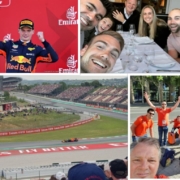 After hard work and successful achieving the 2018 team target, Team G-Nius was rewarded with a incentive. Saturday morning began with leaving to Eindhoven airport where we would leave to Barcelona to attend the Formula 1 GP de Catalunya. After arriving at the airport we were picked up by our driver Ron who drove us to the Circuit to attend the trainings and qualifications. After the qualification for F1 in which Max Verstappen achieved a 4th place, Ron brought us back to our hotel. Everyone was able to fresh up and after a nice walk along the port of Barcelona, ​​we had a delicious, and above all cozy, dinner in Barceloneta. After dinner we had a pleasant walk after which some colleagues decided to enjoy a couple of sangrias on the Ramblas which led to interesting conversations where we got to know each other on a whole new level.

Our sunday started having breakfast, after which we left to the circuit for our spectacular day. On our program was the F3, F2, Porsche Supercup and ultimately the F1. After the Formula 3 race, our colleague Yara was invited by one of the drivers to have a look behind the scenes in the paddock. The rest of us watched the great race in Formula 2 in which Dutch success was celebrated in name of the winner Nick de Vries. After lunch the excitement rose as F1 was starting soon. Could Max ensure that the Wilhelmus sounded the second time that afternoon?  Max eventually drove a succesfull race leaving him in 3rd place as the Mercedessen were too strong to conquer. Nevertheless, a position to be proud of.

After the race, we went to the airport to fly back to the Netherlands. Everybody got home late in the evening and could enjoy the great weekend we had in Barcelona. An exiting team weekend which we all deserved.